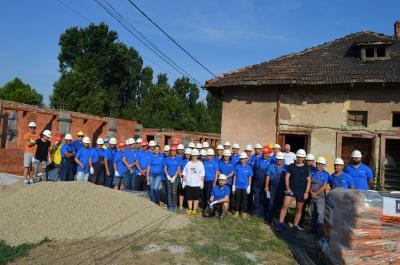 On Friday, 21st July, 40 employees of the Oradea Water Company chose to give a helping hand to build homes for families from Oradea alongside Habitat for Humanity Beius. They work in all the comapny’s departments and wanted to share the joy of helping those in need for a day. They volunteered alongside the beneficiaries of the houses to make the rebar reinforcements, preparing of concrete and the mounting of the reinforcements of the first floor flooring for 4 apartments as part of Habitat pentru Umanitate Beius’ project in Oradea called “Homes for a secure future”.

“This is the first time that I’ve participated as a volunteer and I want to say that for me it’s an experience that I’d like to repeat. It’s a joy to work alongside my colleagues, even though I have not had the opportunity to make the rebar reinforcements yet. I didn’t think it was so easy to bring the smile on the face of those less fortunate with so little effort,” says Anca, one of the volunteers at Oradea Water Company.

Among the beneficiaries of CAO’s help is a family with six children who are currently living in difficult conditions in a degraded home on the outskirts of Oradea. They have no other way to enjoy a decent home because they are not eligible for a credit, and their income would not allow them to build a house for themselves in the next 30 years.

After a hot day, all 40 volunteers had smiles on their faces, seeing that they were leaving behind a beautiful result and families were closer to their dreams of moving into a home of which they have long dreamed.