Students from Beius gave a lesson in humanity

Students and teachers from “Ioan Ciordas” Technical College in Beius responded promptly to a request made by Habitat for Humanity Beius to support another non-profit association with whom it has just started a partnership.

At the beginning of the autumn, Habitat for Humanity Beius signed a partnership with the Peniel Association in Tinca, to help the organization’s beneficiaries to have better living conditions. The Peniel Association is a care centre for the elderly, and sufferers of cancer or other terminal illnesses. It was founded in 2008 in the village of Tinca, Bihor county, on the initiative Badea family, who initially made their house available to these people and then with borrowed money they built a space dedicated for their needs. So far more than 100 people have benefited from the support of the association and at this present time there are 36 people in care of the centre. 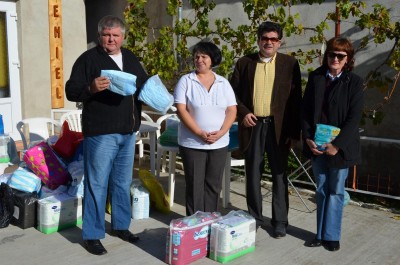 “We’ve reached the point that weekly we receive 4-5 requests to take sick or elderly from medical facilities or for from families who can’t take care of these people. Currently, we are at our maximum capacity and we have a long waiting list. Seeing the great need, we decided to expand and open a new centre in a nearby village where we will have another 14 places.” says Dana Badea, the heart and initiator of the Peniel project.

Habitat for Humanity Beius started in recent years to diversify its projects so not just families in need of housing received the supported of the organization, but also other organizations, institutions or structures that support or have programs for people or families in need. Thus the partnership with the Association Peniel was started, to help make the lives of Peniel’s beneficiaries as comfortable as possible. In addition to the support of building materials provided by Habitat, the Beius organization asked schools in Beius to mobilize students who want to renounce one drink for a day and instead to buy an adult diaper which is so necessary for patients at Peniel. The first to respond to Habitat’s request were students and teachers from “Ioan Ciordas” Technical College, Beius.

“I confess that I was deeply touched to see the prompt reaction of these children who in just a few days gathered over 1000 adult diapers plus wet wipes. Even though I expected them to respond to this charitable activity and to raise a few packages of diapers, what they did with their teachers was surprising considering that they managed to collect 34 packages. ” said Eugenia Coroiu, Habitat families’ assistant who coordinated this activity.

The diapers collected will be sufficient for a month, but the need is still great at Peniel. They have to buy monthly medicines, medical supplies (syringes, gloves, bandages, etc.), detergents, food or firewood. If all of this would be donated, it would relieve Peniel of large expenses and they would more quickly, be able to complete the new centre to assist other people who are in great need of specialized care. The Beius students’ lesson of humanity shows that where there is a will, nothing is impossible.