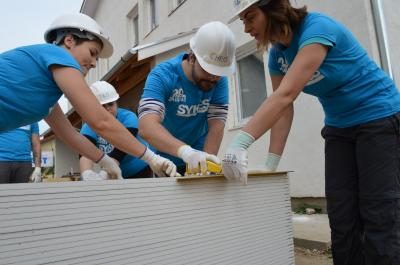 22 employees from Sykes, Oradea, volunteered at a widow’s house

Even though most people spend their free time at end of their week in parks, or on terraces or even at the swimming pool, especially when it’s a beautiful autumn day, see how 20 Oradeans, all colleagues at the company Sykes in Oradea, chose to do something else. They chose to spend their Saturday helping to build the home of a woman who is raising her child alone after her husband died after terrible suffering.

“In the summer I participated for the first time as a volunteer with Habitat and I liked it. So now, when we got the invitation to help again, I asked my colleagues in the office what they want to do this Saturday. The best answer I received was: If it’s Saturday, we’ll volunteer! So here we are building again and spending a great day with Habitat,” says Roxana Derecichei, a volunteer rom Sykes.

The volunteers arrived on Harghitei Street on Saturday morning where Habitat is building 30 homes and they worked until 4pm on the project “Housing for a Safe Future”, a project for the elderly without shelter, single mothers who are raising their children and families evacuated from nationalized homes. The majority of the volunteers were young and full of energy and eager to start. They were equipped properly and put their hands on the tools and then got to work! Under the close supervision and guidance of Habitat specialists, they were able to cover the eaves of the house and put the drywall on the walls of the house in record time.

The company Sykes is participating for the second time this year with volunteers in Habitat projects and wants to continue to do so next year. “Sykes is a multinational company, in Romania having its offices in Cluj and now in Oradea for one and a half years. They provide customer support, with an intercultural team, focused on addressing the technical problems of end users. A principle that mobilizes the entire organizational culture is the interest in providing individualized support, cherishing the people working in the company as well as the people we support (“We help people, one caring interaction at a time”), that is why we are constantly involved in social projects”, says Simion Loredana, a Sykes volunteer.

More photos can be found in the facebook photo album using the following link: https://www.facebook.com/pg/habitatbeius/photos/?tab=album&album_id=10155867923727334